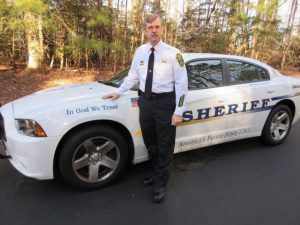 York-Poquoson Sheriff’s Department joined thousands of citizens in the nationwide movement to reaffirm God’s place in the public square by proudly displaying ‘In God We Trust’ on marked patrol vehicles.

Sheriff J.D. “Danny” Diggs, inspired by other police departments and Sheriffs’ offices around the country, purchased 100 decals for the department out of his own pocket. Most of the community rallied around the new displays, supporting the display of America’s national motto ‘In God We Trust’.

Diggs commented that this decision was made as an effort to “acknowledge Him for His blessing upon us; and it shows our patriotism by displaying our national motto.”