History of ‘In God We Trust’

On July 30, 1956, President Eisenhower signed into law the establishment of “In God We 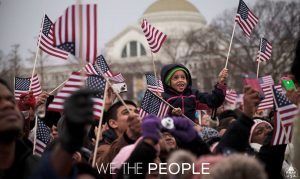 Trust” as our national motto. But it is more than just a motto. It is our country’s foundation and an important part of our identity as Americans.

Several years ago, the appearance of “In God We Trust” on our money was challenged in the federal courts. The challenge was rejected by the lower federal courts, and the Supreme Court of the United States declined to review the case.

The motto IN GOD WE TRUST was placed on United States coins largely because of the increased religious sentiment existing during the Civil War. Secretary of the Treasury Salmon P. Chase received many appeals from devout persons throughout the country, urging that the United States recognize the Deity on United States coins. From Treasury Department records, it appears that the first such appeal came in a letter dated November 13, 1861. It was written to Secretary Chase by Rev. M. R. Watkinson, Minister of the Gospel from Ridleyville, Pennsylvania, and read:

Dear Sir: You are about to submit your annual report to the Congress respecting the affairs of the national finances.

One fact touching our currency has hitherto been seriously overlooked. I mean the recognition of the Almighty God in some form on our coins.

You are probably a Christian. What if our Republic were not shattered beyond reconstruction? Would not the antiquaries of succeeding centuries rightly reason from our past that we were a heathen nation? What I propose is that instead of the goddess of liberty we shall have next inside the 13 stars a ring inscribed with the words PERPETUAL UNION; within the ring the allseeing eye, crowned with a halo; beneath this eye the American flag, bearing in its field stars equal to the number of the States united; in the folds of the bars the words GOD, LIBERTY, LAW.

This would make a beautiful coin, to which no possible citizen could object. This would relieve us from the ignominy of heathenism. This would place us openly under the Divine protection we have personally claimed. From my hearth I have felt our national shame in disowning God as not the least of our present national disasters.

To you first I address a subject that must be agitated.

As a result, Secretary Chase instructed James Pollock, Director of the Mint at Philadelphia, to prepare a motto, in a letter dated November 20, 1861:

Dear Sir: No nation can be strong except in the strength of God, or safe except in His defense. The trust of our people in God should be declared on our national coins.

You will cause a device to be prepared without unnecessary delay with a motto expressing in the fewest and tersest words possible this national recognition.

It was found that the Act of Congress dated January 18, 1837, prescribed the mottoes and devices that should be placed upon the coins of the United States. This meant that the mint could make no changes without the enactment of additional legislation by the Congress. In December 1863, the Director of the Mint submitted designs for new one-cent coin, two-cent coin, and three-cent coin to Secretary Chase for approval. He proposed that upon the designs either OUR COUNTRY; OUR GOD or GOD, OUR TRUST should appear as a motto on the coins. In a letter to the Mint Director on December 9, 1863, Secretary Chase stated:

The Congress passed the Act of April 22, 1864. This legislation changed the composition of the one-cent coin and authorized the minting of the two-cent coin. The Mint Director was directed to develop the designs for these coins for final approval of the Secretary. IN GOD WE TRUST first appeared on the 1864 two-cent coin.

Another Act of Congress passed on March 3, 1865. It allowed the Mint Director, with the Secretary’s approval, to place the motto on all gold and silver coins that “shall admit the inscription thereon.” Under the Act, the motto was placed on the gold double-eagle coin, the gold eagle coin, and the gold half-eagle coin. It was also placed on the silver dollar coin, the half-dollar coin and the quarter-dollar coin, and on the nickel three-cent coin beginning in 1866. Later, Congress passed the Coinage Act of February 12, 1873. It also said that the Secretary “may cause the motto IN GOD WE TRUST to be inscribed on such coins as shall admit of such motto.”

The use of IN GOD WE TRUST has not been uninterrupted. The motto disappeared from the five-cent coin in 1883, and did not reappear until production of the Jefferson nickel began in 1938. Since 1938, all United States coins bear the inscription. Later, the motto was found missing from the new design of the double-eagle gold coin and the eagle gold coin shortly after they appeared in 1907. In response to a general demand, Congress ordered it restored, and the Act of May 18, 1908, made it mandatory on all coins upon which it had previously appeared. IN GOD WE TRUST was not mandatory on the one-cent coin and five-cent coin. It could be placed on them by the Secretary or the Mint Director with the Secretary’s approval.

A law passed by the 84th Congress (P.L. 84-140) and approved by the President on July 30, 1956, the President approved a Joint Resolution of the 84th Congress, declaring IN GOD WE TRUST the national motto of the United States. IN GOD WE TRUST was first used on paper money in 1957, when it appeared on the one-dollar silver certificate. The first paper currency bearing the motto entered circulation on October 1, 1957. The Bureau of Engraving and Printing (BEP) was converting to the dry intaglio printing process. During this conversion, it gradually included IN GOD WE TRUST in the back design of all classes and denominations of currency.

As a part of a comprehensive modernization program the BEP successfully developed and installed new high-speed rotary intaglio printing presses in 1957. These allowed BEP to print currency by the dry intaglio process, 32 notes to the sheet. One-dollar silver certificates were the first denomination printed on the new high-speed presses. They included IN GOD WE TRUST as part of the reverse design as BEP adopted new dies according to the law. The motto also appeared on one-dollar silver certificates of the 1957-A and 1957-B series.

BEP prints United States paper currency by an intaglio process from engraved plates. It was necessary, therefore, to engrave the motto into the printing plates as a part of the basic engraved design to give it the prominence it deserved.

One-dollar silver certificates series 1935, 1935-A, 1935-B, 1935-C, 1935-D, 1935-E, 1935-F, 1935-G, and 1935-H were all printed on the older flat-bed presses by the wet intaglio process. P.L. 84-140 recognized that an enormous expense would be associated with immediately replacing the costly printing plates. The law allowed BEP to gradually convert to the inclusion of IN GOD WE TRUST on the currency. Accordingly, the motto is not found on series 1935-E and 1935-F one-dollar notes. By September 1961, IN GOD WE TRUST had been added to the back design of the Series 1935-G notes. Some early printings of this series do not bear the motto. IN GOD WE TRUST appears on all series 1935-H one-dollar silver certificates.

Below is a listing by denomination of the first production and delivery dates for currency bearing IN GOD WE TRUST: