Chesapeake Declares “In God We Trust” 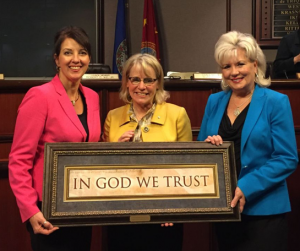 With letters of support from area pastors in hand, Congressman Randy Forbes, Lea Carawan and Shirley Forbes spoke about the unifying effect of displaying our National Motto across the nation. In his remarks, Congressman Forbes stated that our Motto will help Americans “recognize that there are priorities bigger than ourselves.”

This resolution prompted articles in the regional newspaper, was featured on morning talk shows and has encouraged multiple local city councils and law enforcement agencies to begin the process of “putting it up!”

Yesterday CBN News interviewed Congressman Forbes to discuss the In God We Trust. Put It Up! initiative that is sweeping the nation.